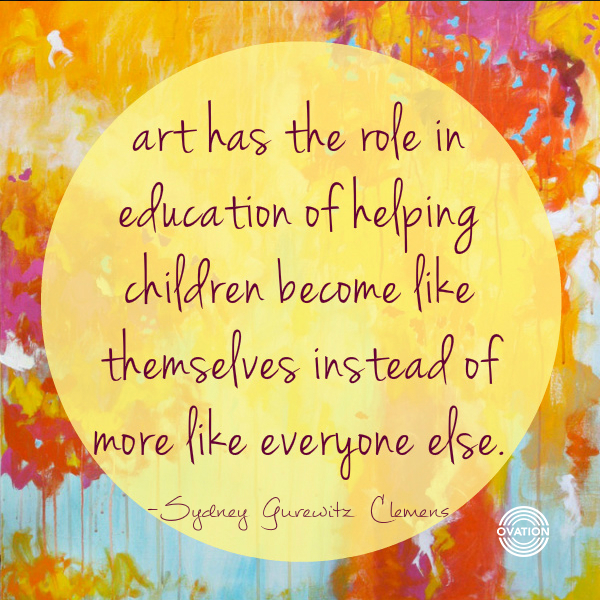 I was invited to teach an art class at our local pre-school, Kids Club House this year! Both of my kids attended KCH and thrived, so I’m so excited to be part of the KCH family. I can’t wait to have fun with these kids and expose them to different techniques & mediums. I think the first class will be my favorite where we explore abstract art, color, & emotions while painting to music! Or maybe the printmaking class. Or maybe the collage class. or…..

Please have a quick read on PBS on the developmental benefits of art for children. I believe it’s essential to give children of all ages creative channels for expressing emotions and points of view that they may not have words for.  The world would be a much better place if we all could find a productive channels rather than destructive ones. Whether it be visual art, writing, dance, music….

Below I’ve posted some of my favorite quotes alongside pictures of my kids making art together.  I love watching & creating with them and look forward to creating with some new children!

“Every child is an artist. The problem is how to remain an artist once he grows up.” Pablo Picasso 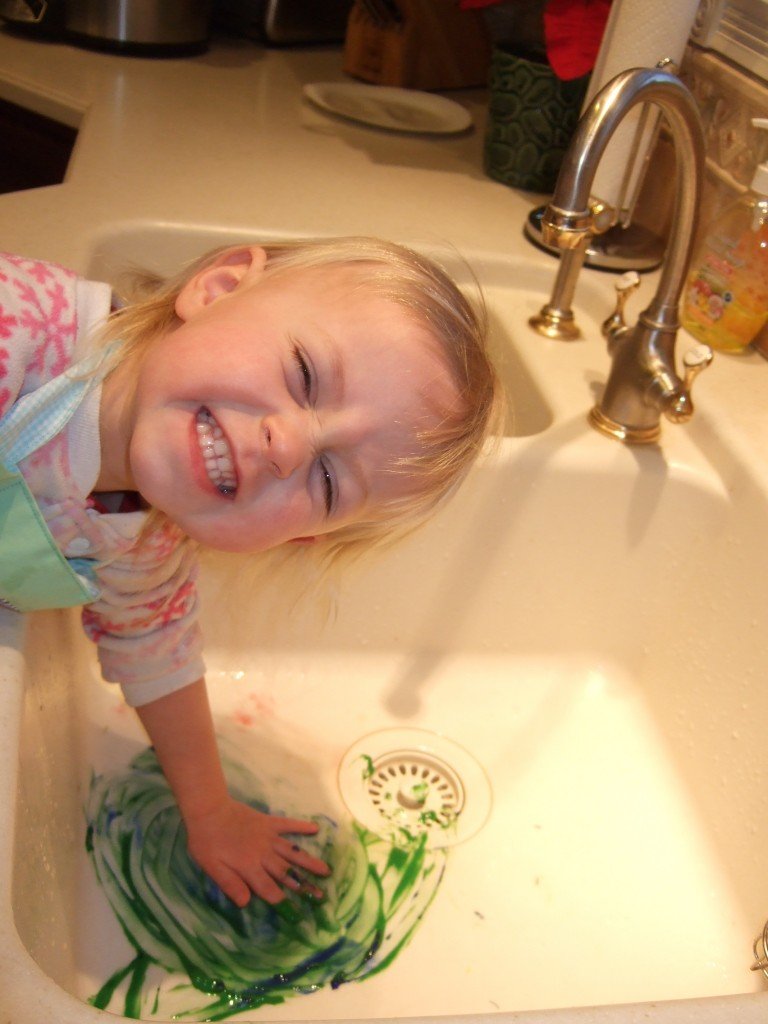 “Painting is just another way of keeping a diary.” Pablo Picasso 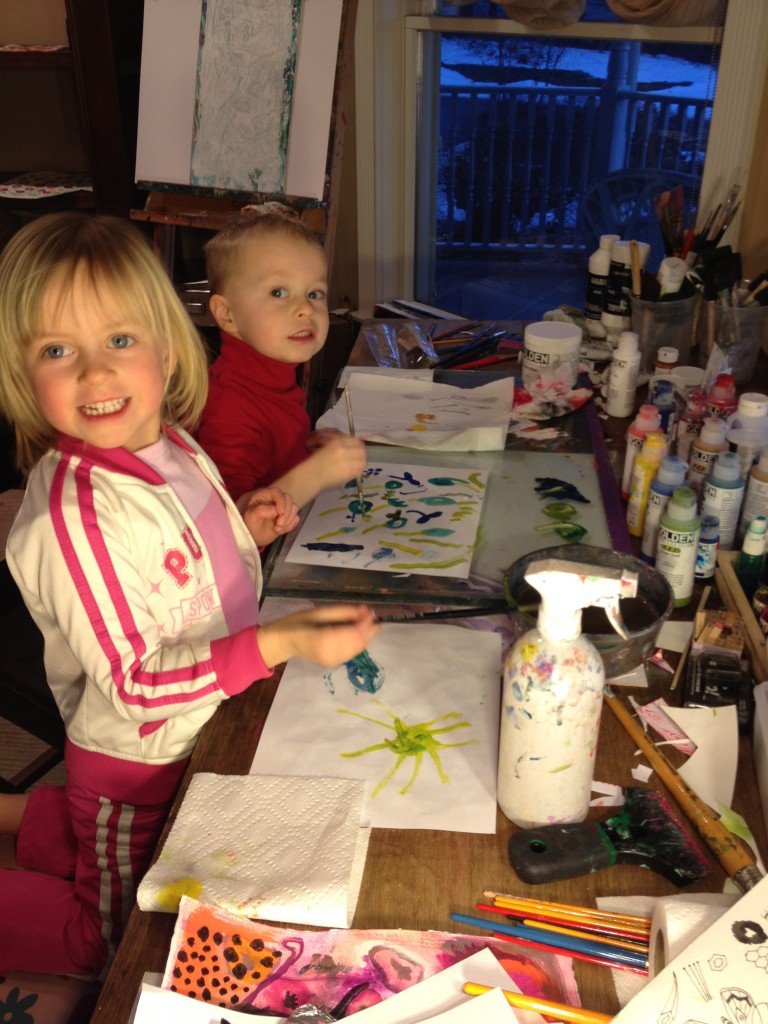 “I found I could say things with color and shapes that I couldn’t say any other way–things I had no words for.” Georgia O’Keeffe 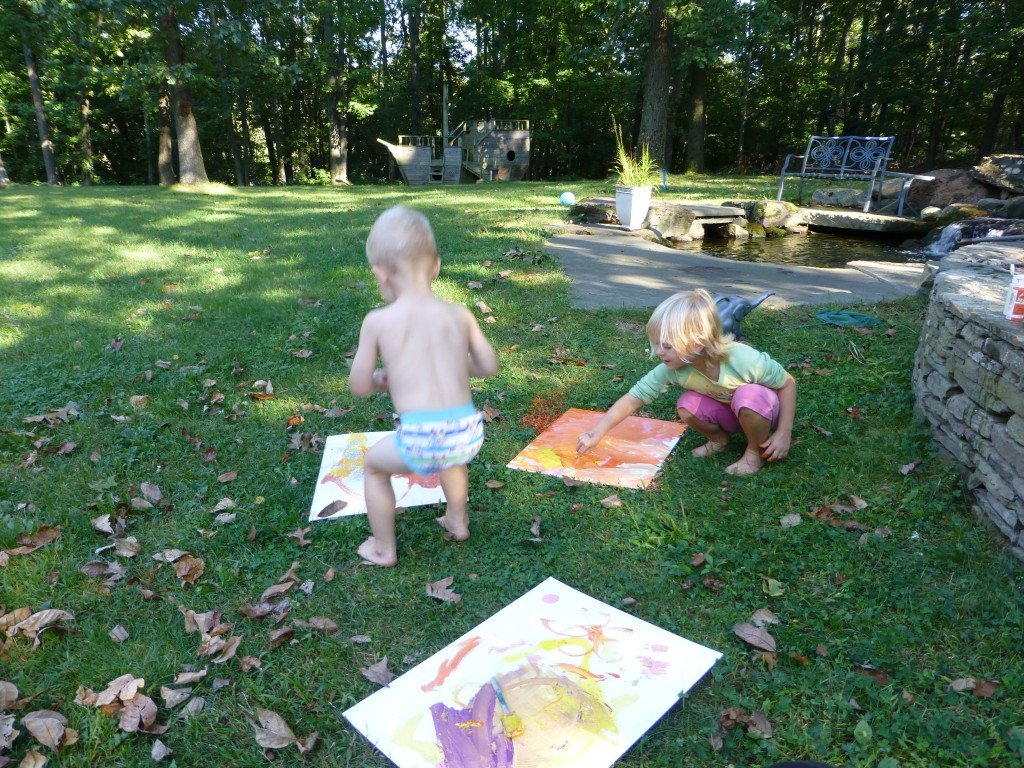 “If I could say it in words there would be no reason to paint.” – Edward Hopper 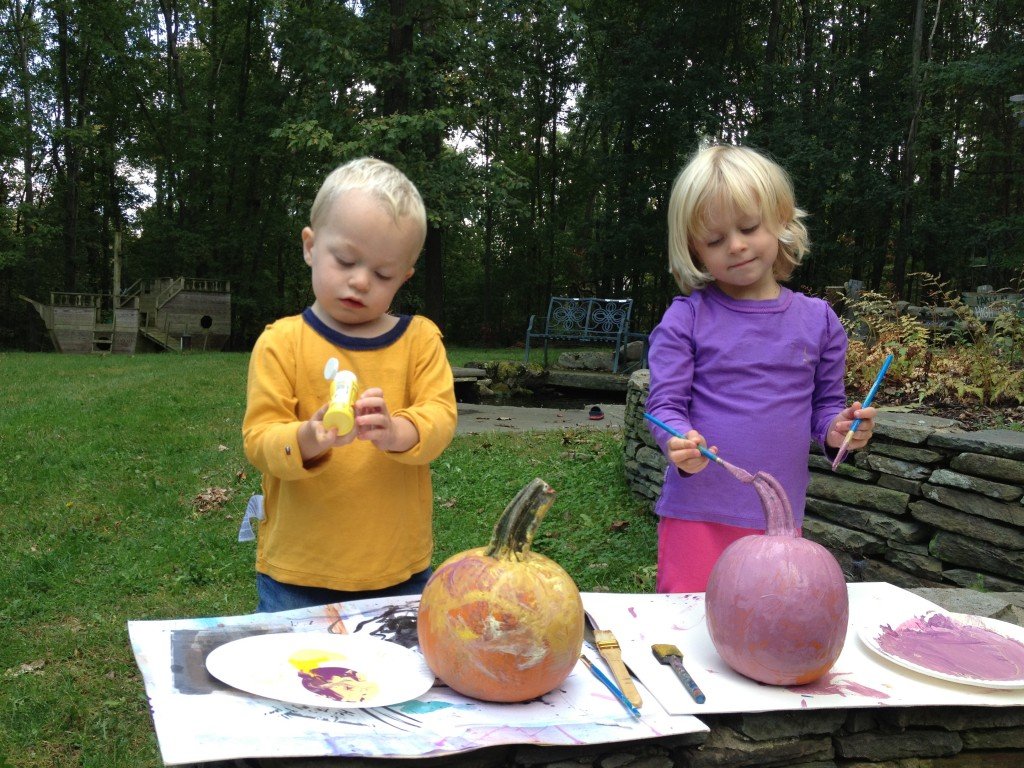 “Art is the only way to run away without leaving home.” Twyla Tharp 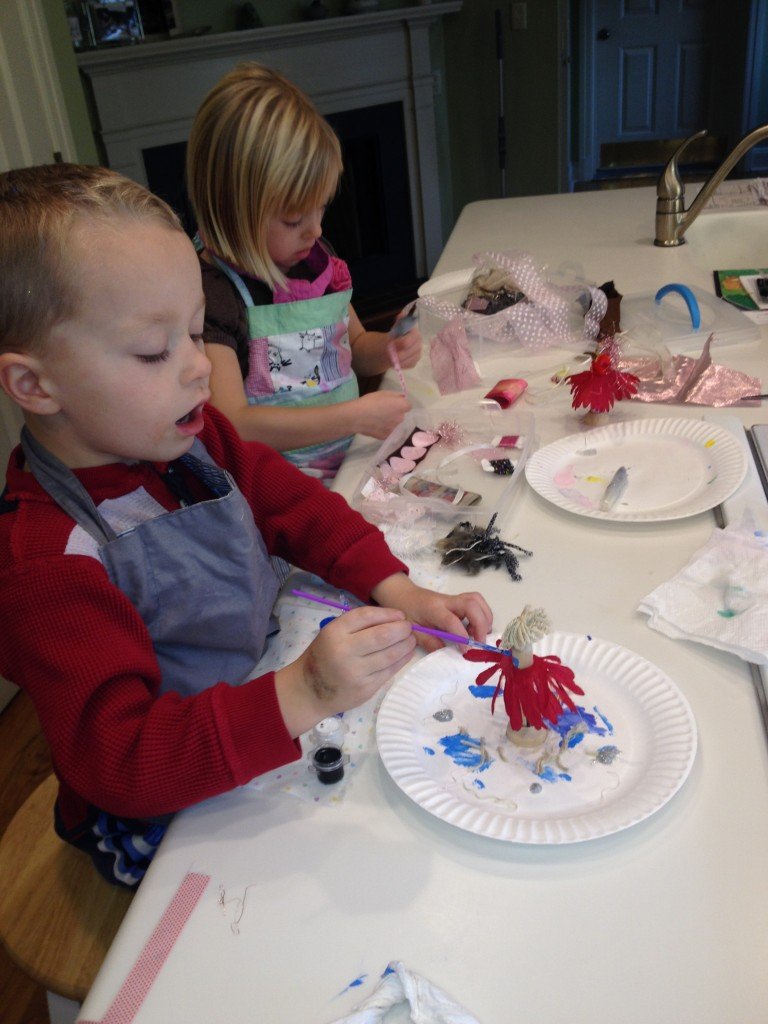 “The only time I feel alive is when I’m painting.” Vincent Van Gogh 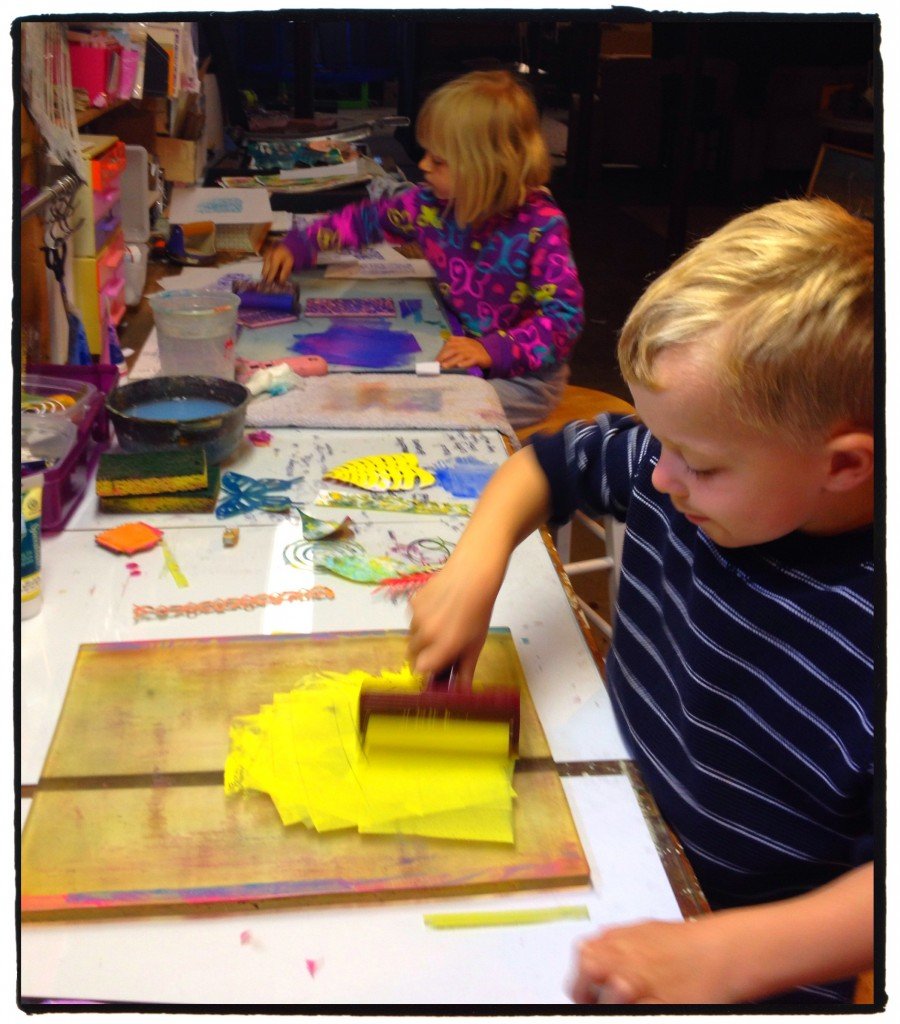 “The arts provide a more comprehensive and insightful education because they invite students to explore the emotional, intuitive, and irrational aspects of life that science is hard pressed to explain. ” Charles Fowler

“Art education meets the emotional needs of students, establishes a fundamental framework for understanding, and enhances learning in academic subjects. At the elementary level, children form an understanding of their selves and world (Day& Hurwitz, 2001, Children and Their Art). Therefore, it is imperative to provide an outlet for children to visually express their selves, issues, emotions, and conflicts.”  – Anna E. Morrow, University of Georgia

999 people entered the Lilla Rogers Global Talent Search and only 50 will make it through to the next round! I’m not going to post details of the contest requirements but will share my entry below!

I used a combination of collage, gelatin prints, linocut, hand lettering & drawing & painting on this one. I like the dynamic movement of it and will hang it by my desk as inspiration for future projects. I used colors that match my kitchen / desk work area. I know this could use a bunch more tweaking & editing, but time ran out on me this weekend! My other previous attempts are below…

Here were some of my previous attempts working out shape/concept/wording/colors. I had thought of doing a “Tea-rarrium” teapot. Or a Pied-a-terre (second home). But in the end I make a last minute switch to something much more artistic, less symmetrical, and it felt right to me. Good luck to everyone in the talent search, there are so many great terrariums out there now! 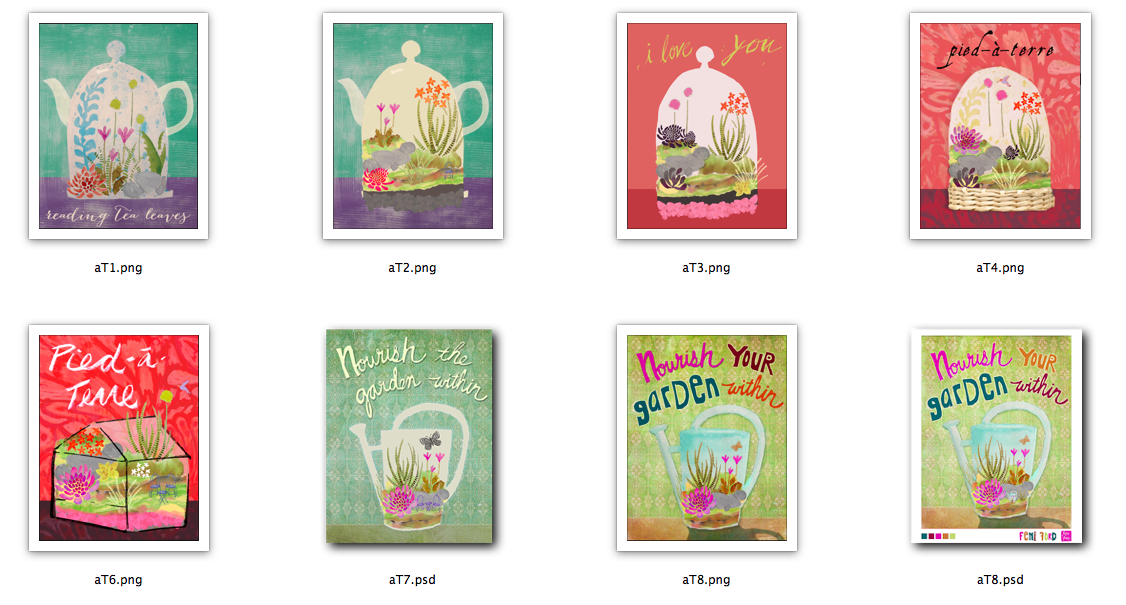 Wow! Where is the time going? I need to regroup, clean my studio & focus! Maybe that should be my word for the year…FOCUS. I thought it was VIBRANT, but I think that pertains mainly to the result of being FOCUSED! Cause & effect people!

I’m looking around my studio at the piles of inspiration & creations. Wondering what to do with all these raw elements that have been incorporated into patterns. They are not quite developed individually enough to be final sale-able art on their own (in my eyes). First runs of linoprints, textures, doodles, mark making, etc. So I’m thinking of cutting them up and reassembling into one of a kind note cards. They actually sold well at my open studio tour last fall.

HOWEVER> I am attached to each of these little pieces & scraps. I am a paper scrap hoarder. THERE I’VE SAID IT. When I look at each of these colorful creations, I remember what inspired it, how I felt while creating it and what pattern it eventually turned into…that’s a lot of baggage for a shred of paper the size of my hand!

On top of this, I think we are moving in May (for real this time). So I realllly need to address the situation. So….I think notecards it is….my chest is already tightening at the thought of wielding scissors to paper. help.

What do you do with your leftover arts??

My very talented cousin, John Willemse, recently released some new music.  I was so inspired by his song, Better Days, that I carved the above linocut for it.
Please buy the song, Better Days, on iTunes
Like him on Facebook:  http://www.facebook.com/johnwillemse
Watch/listen to the video below: 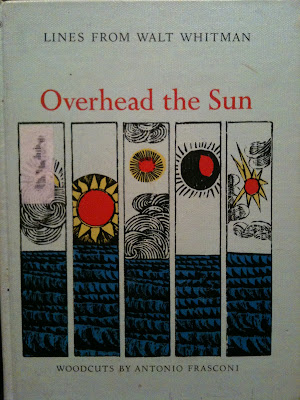 Loving this book I treated myself to!

From A Dictionary of Symbols, Second Edition

From about the middle of the last century, the tendency of poetry and the visual arts has been towards a mode of expression whose antecedents go back through the ages—but received a particular impetus, around the year 1800, from the works of William Blake—and which might, with justification, be termed hermetic. This movement was characterized by the quest for the obscure as a self-sufficient goal, and by the representation of ‘harmonious wholes’ whose fascination lies in their remoteness. There is an illuminating definition of poetry in this sense by the German poet Gottfried Benn: ‘The writing of poetry is the elevation of things into the language of the incomprehensible.’ It is this type of unfamiliar pattern that constitutes the ‘unknown image’—a pattern of words, shapes or colours that has no correspondence with the normal, either in the world of exterior reality or in that of normal, human feelings. These ‘unknown images’ create their own kind of reality and express the spiritual need of particular individuals to live within this created reality.

They symbolize, in sum, the unknown, the antecedents and the aftermath of man, or that which surrounds him and which his senses and his intelligence are incapable of apprehending or of appropriating. The scope of the unknown is immense, for it encompasses the Supreme Mystery or the Mystery of mysteries (the secret of the cosmos and of creation and the nature of Being), and also the psychological—and, indeed, existential—mystery of the ‘unexplored’. What is unknown is that which is unformed. The ‘unknown image’ is also related to death and to the thread which connects death with life (Plate XIX). 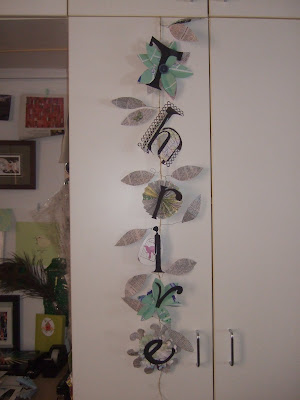 I came across this poem during a Buddhism class in college…just came across it now in an old sketchbook having meant to do an illustration for it. Maybe I’ll get around to that someday!

by Ryokan, Zen Monk-Poet of Japan

It took place in a world long long ago they say:
a monkey, a rabbit, and a fox struck up a friendship,
morning frolicking field and hill,
evenings coming home to the forest,
living thus while the years went by,
when Indra, sovereign of the skies,
hearing of this,
curious to know if it was true,
turned himself into an old man,
tottering along,
made his way to where they were.

“You three,” he said, “are of separate species
yet play together with a single heart.
If what I’ve heard is true,
pray save an old man who’s hungry!”
then he set his staff aside,
sat down to rest.

Simple enough, they said, and presently
the monkey appeared from the grove behind
bearing nuts he’d gathered there,
and the fox returned from the rivulet in front,
clamped in his jaws a fish he’d caught.

But the rabbit,
though he hopped and hopped everywhere
couldn’t find anything at all,
while the others cursed him
because his heart was not like theirs.

Miserable me! he thought,
and then he said
“Monkey, go cut me firewood!
Fox, build me a fire with it!”
and when they’d done what he’d asked,
he flung himself into the midst of the flames,
made himself an offering
for an unknown man.

When the old man saw this his heart withered.
He looked up to the sky,
cried aloud,
then sank to the ground,
and in a while,
beating his breast, said to the others,

“Each of you three friends has done his best,
but what the rabbit did touches me the most!”

Then he made the rabbit whole again
and gathering the dead body up in his arms,
took it and laid it to rest in the palace of the moon.

From that time till now
the story’s been told,
this tale of
how the rabbit came to be in the moon,
and even I
when I hear it
find the tears
soaking the sleeve of my robe.

Translation Burton Watson:
(The poem is a retelling of one of the Jataka
stories, tales of the Buddha in his earlier
incarnations when he performed various acts of
self-sacrifice. Ryokan follows the version of
the tale found in chapter five of the Konjaku
monogatari, a collection of stories in Japanese,
many Buddhist in nature, compiled around 1100.
This version relates the jataka tale to the odd
Chinese legend of a rabbit who inhabits the moon.
There are numerous versions of the poem with slight
textual variations; I follow the text given in
Yoshino Hideo’s collection, PP. 319-22.)