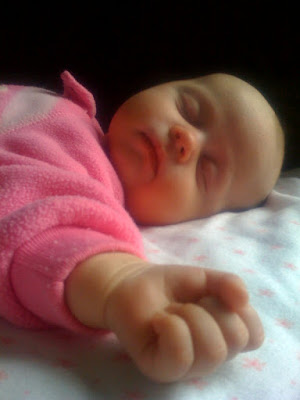 Ellie is now 2 months old and mommy still hasn’t broken her! On Sunday we took her out to see my art show in Maplewood, NJ. She was by far my best work at the show.

Last night she slept from 8pm – 4 for a 8hr record! We fed her and she slept another 4hrs! She has been doing this for about a week now so I think it will stick. She helps to put herself to sleep by sucking her right hand and playing with her ear with the left while making soft babbling noises. She enjoys her musical mobile now. If we don’t put her in a sleep sack she moves around a lot in her crib and ends up at the opposite end of the crib having done a 180.

She has also broken records in the eating department by consuming 7oz at one feeding and we’ve graduated to the medium flow bottle for a faster feeding…although she does dribble a lot more.

She loves taking baths now and has mastered the backstroke. She loves when we sing the ABC’s and the Wheels on the Bus. She is trying to imitate the noises we make especially oohs & ahhs. She’s lost quite a bit of her blonde hair in the front but it’s still going strong in the back. Quite the mullet 🙂 Ellie doesn’t love tummy time but we’re working on it. She still has some gas & #2 issues but I’m going to take her off formula completely for a couple days and see how that goes and whether my production will keep up!

Our doctor appointment is next week on Feb 3 so stay tuned for the next weigh-in.

PS. did I mention she is the most beautiful baby around? no joke.

November was a gust that blew through here like a hurricane and left in it's path smiles, laughter, crafts, gifts…

A while back I wrote a post titled 'artist moms' when I was struggling to find time to be creative.

I did these two sweet acrylic paintings of a whale & elephant with a kids room in mind.

this week, i slowly but surely made some things that i've been wanting to try just for fun.i channeled my…