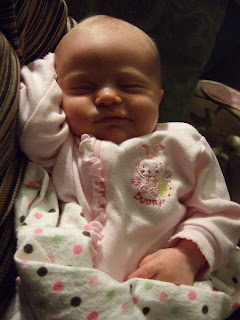 What a trip. I can’t believe Ellie is here…and she is ours…to keep…alive.

I arrived at the hospital 7pm Monday, Dec 1 with Kenny & my parents. We checked into the room and did some light paperwork. By 8pm I was in bed in my own nightgown, hooked up to the monitor. the computer monitor was cool because not only could you see a graph with your contraction frequency/strength…it also showed the contractions of the other ladies in labor on the same floor. so it was like watching a horse race 🙂

We could see I was having contractions on my own about 8min apart so they didn’t start the induction right away. my parents left at 10:30 and kenny was spending the night with me. after we settled in for the night my contractions slowed down and I received the first dose of Cytotec. I received 4 oral doses of Cytotec throughout the night & was able to sleep in between. The contractions were more like heavy menstrual cramping at this point.

Tuesday morning my parents came back and the doctor arrived at 10am on to break my water to help get things going. now when i say he broke my water, we’re talking Niagra Falls here people. and there was a lot of meconium which made me nervous even though the doctor said it was common with late babies.

Things started moving along and they started the Pitocin at 12pm. I still wanted to avoid an epidural at this point but by 2pm I was writhing in pain. so I signed the papers for the epidural and it couldn’t come fast enough. it didn’t hurt even though i had contractions while they were putting the needle in my spine. the relief was heavenly and it was so odd not to have any sensation in my abdomen. exactly like the numb lip feeling at the dentist, except my entire stomach felt like a foreign object in the bed with me.

On we go for several more hours. i was still able to feel the contractions though not as painful as before. they had me lie on my side which is better for the baby but the contractions hurt a lot more in this position. so i kept switching between my sides & my back.

between 2 & 5pm, the nurses came in periodically to check on my cervix and there was a lot of discrepancy between their assessments which was frustrating. at about 3pm one nurse said 3cm and about 5pm another said 8cm. i was tired at this point from the 2 hours of non-epidural contractions and i had developed a temperature (likely from the epidural.) so i got excited thinking i would be able to push soon. kenny’s parents arrived and were hanging out with us too.

3 hours later at 8pm i was still only about 9cm and reallllly tired & frustrated. a female doctor came in and determined that my cervix was either not thinning out in one spot or there was some extra membrane in the way so I was not allowed to push. i really wanted to see my doctor at this point to get his opinion of when i would be able to push. i hadn’t seen him since 10am when he broke my water and he was still MIA…the nurses kept telling me, ‘we called him, he’s on his way’. it was totally frustrating and i felt like crying at that point.

Finally at about 9pm the doctor showed up and we decided that even though i was not fully dilated (9.5cm) i would try pushing since my fever had subsided and was able to feel the urge to push with the contractions. i had just my mom & kenny stay with me and at 9:30 we started setting up and doing the first pushing with the nurse. the pushing was completely exhausting and went on for 1.25 hours. i’d push 3 times for 10 seconds for every contraction which were coming about every 3 minutes. ( so i guess that works out to about 75 of the hardest crunches i’ve ever done.) i felt progress but not enough to gauge where the baby really was so I watched everyone’s faces to tell whether the baby was really coming or not. the doctor ended up doing an episiotomy right at the end to get my baby’s chubby head out. he numbed me before so it didn’t hurt at all. shortly thereafter, i saw the back of Ellie’s head! it was surreal…she was multicolored from the blood & meconium but i knew the end was in sight. the doctor had me stop pushing while he cleared her mouth & nose of fluids. it would be really bad if she aspirated the meconium. finally i was able to push out her 9lb 5oz body and a ton of fluid to follow. it was not pretty due to meconium (green gunky) but they were able to clean her up and get the fluid out of her throat so we could finally hear her cry and place her on my chest for the first time! her head was just a little ‘coney’ but not as bad as i expected. i was so relieved to be done pushing and that she was healthy as far as we could tell at that point. relief, relief, relief. love, love, love. that’s all i could think.

She is the cutest baby ever.

Ellie has taken it easy on us except for some problems w/gas & pooping. She gets really bad cramps and it kills me to hear her cry so hard. The doctor gave us some tips & tricks so we are working on it. we’ve seen her poop go through every color of the rainbow & texture 🙂

Besides that she is an absolute angel. we are breastfeeding, pumping & supplementing with formula if I run out of those…but i’m close to not needing formula at all anymore. she sleeps most of the time and only gets up twice in the night for a diaper change & feeding. last night she lost her umbilical cord stump! i believe she has an ‘innie’ bellybutton so far 🙂

Thanks to everyone for your love, support, advice & gifts! Hopefully we’ll see most of you over the holidays while she’s still small-ish!

I was invited to teach an art class at our local pre-school, Kids Club House this year! Both of my…

I spent a good part of the afternoon attempting to create new clothes for my daughter's Barbie and Princess dolls.

November was a gust that blew through here like a hurricane and left in it's path smiles, laughter, crafts, gifts…

A while back I wrote a post titled 'artist moms' when I was struggling to find time to be creative.

One Reply to “birth & beyond”